The Calm Center: Reflections and Meditations for Spiritual Awakening 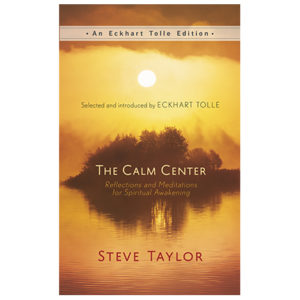 How religious you are depends on the nature and strength of your beliefs and how deeply you are self-identified with them.  How spiritual you are depends on your degree of presence in everyday life, which is to say your state of consciousness.

The essence of all spirituality is presence, a state of consciousness that transcends thinking.  There is a space behind and in between your thoughts and emotions.  When you become aware of that space, you are presence, and you realize that your personal history, which consists of thought, is not your true identity and is not the essence of who you are.  What is that space, that inner spaciousness?  It is stillness, the calm center.  It is pure consciousness, the transcendent I AM that becomes aware of itself.  The Buddha called it sunyata, emptiness.  It is the “kingdom of heaven” that Jesus pointed to, which is within you, here and now.

As presence increasingly arises within you, it manifests in many different ways:  inner peace, empathy, an outflow of goodwill toward your fellow human beings, creativity, a heightened sense of aliveness, freedom from dysfunctional and compulsive thinking, a deep appreciation of the present moment.  All these shifts and many other changes greatly enhance the quality of your life.

Presence can also empower and inspire the spoken and written word.  All true spiritual teachings use words as pointers toward that transcendent dimension of consciousness that is presence.  In some mysterious way, the words that arise out of presence are imbued with a certain power that goes beyond their informational value and is reflective of presence.  That power can awaken or deepen the presence in those people who listen to or read those words.  All true spiritual books have that power.  You can, and indeed will want to, return to and reread them many times, because a certain shift in consciousness happens within you as you read.  You enter the state of presence.

The Calm Center is one of those rare books.  It belongs to the genre of poetry, which has been recognized since ancient times as a highly appropriate medium for the expression and transmission of spiritual truth.  May ancient scriptures can be considered either as poetry or as existing on the borderline between poetry and prose.  The Upanishads, the Bhagavad Gita, the Dhammapada, and the Tao Te Ching are all poetic in nature.  In these texts, meaning, images, sounds, and rhythm interact to create a harmonious whole whose transformative power is activated in the consciousness of the reader or listener.  Then there are the great mystical poets of Sufism, such as Hafiz, Rumi, Kabir, and Attar; and the Buddhist poets Basho and Milarepa.  In the Christian tradition also there are great mystical poets, such as St. John of the Cross, Angelus Silesius, and of course Meister Eckhart, whose writings, with their masterful use of images and metaphors, could be described as poetic prose.  In more recent times, the spiritual dimension is present in the works of numerous poets, such as Wordsworth, Whitman, Rilke, and many others.

Steve Taylor’s The Calm Center is a contemporary incarnation of that ancient tradition of poetic spiritual discourse.  The ultimate subject matter of almost each one of these poems is the reader’s state of consciousness.  If you open yourself to their transformative power, and read slowly and attentively, then you will find that each piece will work its magic within you and bring about a subtle but distinct shift in your state of consciousness.  It will free you from the mental noise of compulsive thinking and raise you into the alert inner stillness that is presence.  It will awaken you to the spiritual dimension.  And if you enjoy reading these poems repeatedly, their cumulative effect will be potentially life-changing.

I recommend that you keep a copy of the book on your bedside table and another at your place of work to provide spiritual sustenance during your breaks, however short.  The reading of each piece can become a mini-meditation, and often one will be all you need at any given time.  I have read some of Steve Taylor’s poems out loud to the participants at spiritual retreats, where they were enthusiastically received.  I would advise that you also occasionally share your favorite pieces aloud with your partner, spouse, family members, or group of friends.  You, as well as those who listen, will benefit greatly from this, as will the quality of your relationship.  Just make sure however, that the other person is open and receptive, so that you don’t cast these pearls before people who are too unconscious to appreciate them.

Allow me to start off your spiritual reading pleasure with this little excerpt from a poem:

I wish I could show you,
When you are lonely or in darkness
The Astonishing Light
Of your own Being!*

This little gem certainly does not look out of place in the pages of this book.  It was written, however, over six hundred years ago by the great Persian Sufi poet Hafiz, who has given the epithet “Tongue of the Invisible” — which goes to show that words that emanate from presence are timeless.